In spite of Chinese data being quite solid, CHNComp is sliding today. The index is struggling near the resistance zone marked by 78.6% Fibo level (11425 pts).

GBPUSD pulls back below 1.31 after retail sales miss

Retail sales data for December from the United Kingdom was released at 9:30 am GMT. Headline print showed a drop of 0.6% MoM (exp. +0.6% MoM) while gauge excluding fuel slipped 0.8% MoM (exp. +0.8% MoM). The reading boosts already high market odds for BoE rate cut on January 30. GBPUSD pulled back below 1.31 after the release.

GBPUSD pulled back below 1.31 handle following release of dismal retail sales data. The pair is making a major dive and near the 200-session moving average (purple line)

WTI (OIL.WTI) bounced off the intersection of 50- and 200-session moving averages (green and purple lines). Commodity catches a bid at the beginning of a new week, thanks to supply disruptions in Iraq and Libya. The nearest resistance can be found at $61

AUDUSD launched a new week slightly lower. Looking at the daily time frame, the pair is trading near the key support at 0.6850. A rebound from the area marked with green colour may hint at the pair returning to an upward trend. In such a scenario, the nearest resistance to watch can be found at 0.6930 handle, where sellers took over last week. On the other hand, a break below the aforementioned support at 0.6850, could pave the way for a bigger downward move and 0.6755 handle could be at risk.

USDJPY is pulling back from the topside resistance of the upward channel. The pair is reacting to a rise in risk-off moods related to Chinese virus. The first near term support can be found at 109.60 handle, that served as a ceiling between late-November 2019 and early-January 2020

OIL nosedives for another day and eyes a test of the support zone ranging below $61 handle. Potential hit to demand in response to coronavirus outbreak is the reason behind a drop

Markets are down on Thursday from Asia to the US as investors become concerned with consequences of the Chinese virus that has killed at least 17 in China but has also been already detected in the US and UK. The Chinese decided to close Wuhan metropolitan area and travel limitations will deal a clear hit to the economy days before the start of the Lunar New Year. Obviously, the more the virus spreads, the broader consequences it might have globally, just when the economy looked to start stabilizing.

Wall Street and DE30 hit fresh all time highs just yesterday but today the moods are much darker. While the losses in the US are moderate (US100 is actually close to zero, US30 slides by 0.5%), Europe is deeper in the red with DE30 down 0.7% and RUS50 (due to sinking oil prices) 1.5% lower. A false breakout on DE30 yesterday might be very costly unless bulls regroup soon.

We finally see some moves on the FX market, as the Japanese yen storms higher amid risk aversion. The ECB was technically the event of the day but it didn’t offer many hints regarding the future policy other than Lagarde opening the door very very slightly to more asset purchases. That was enough to trounce euro lower and EURUSD sunk to 1.1040, the lowest level this year. EURJPY slid by 0.9% and GBPJPY as the Queen signed the Brexit bill. Ugly trade data from Japan (Japanese exports declined in y/y terms in EACH of the months in 2019) had little impact as risk aversion flows dominated the market. 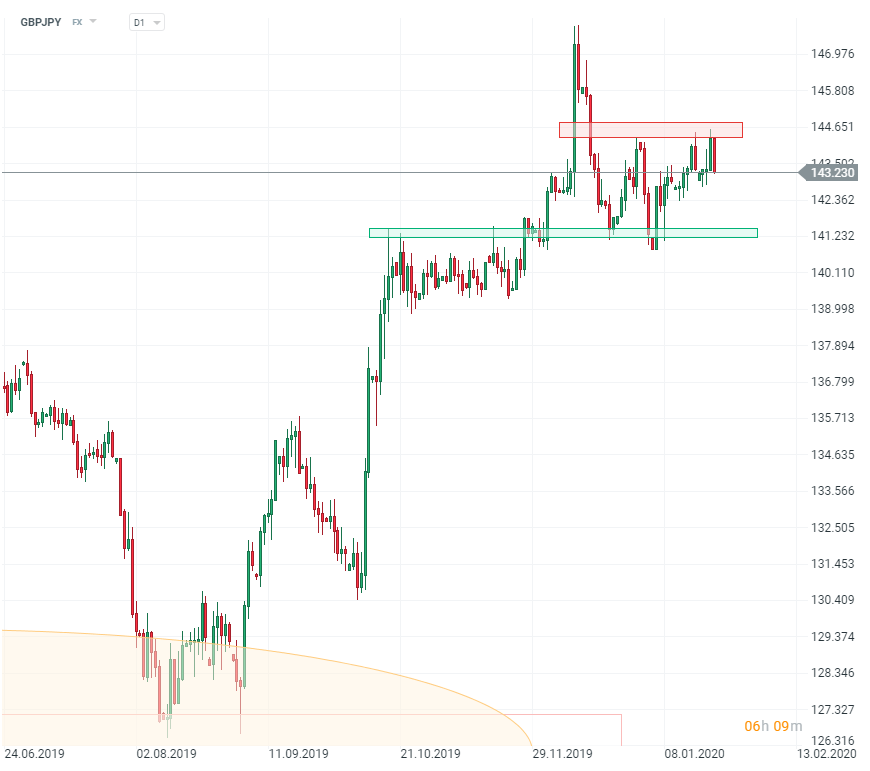 Is the bullish trend over? GBPJPY has painted a full bearish reversal on the D1 chart. Source: xStation5

Oil continued to sink as the virus could hurt oil demand. Brent oil (OIL) slid below $61 for the first time since 3 December but recovered slightly after the US inventory data showed a smaller build of gasoline stocks and a draw of distillates.

Friday will be crucial from the macroeconomic perspective as we will get flash PMIs from Japan, Europe and US. We are sure that the virus will draw the most attention but unless the economy improves (as investors hope) this correction could get much uglier.

WTI (OIL.WTI) remains under pressure as traders remain afraid of a potential hit to oil demand. Crude trades at the 3-month low and nears key support zone ranging around $52 handle.

Last week, investors remained cautious and tended to buy U.S. dollars, whose value peaked since early December 2019. There has been no major change in the political arena and the market was led by a general risk sentiment among market participants.

U.S. economic data was relatively positive. Preliminary manufacturing PMI index, released Friday by Markit, showed a decline from 52.4 points to 51.7 points, but remained within the expansion area. Existing home sales in December were 5.54 million units a year, above analyst expectations of 5.35 million. Overall, the residential market is showing recovery, following a slowdown in early 2019, as lower interest rates and rising house prices have boosted buyer activity. The number of new unemployment applications reached 211 thousand and was relatively stable compared to last week.

The main currency pair EUR/USD reflected the appetite for market risk and thus recorded a slight depreciation. Christine Lagarde, head of the European Central Bank, said at a press conference that members see further economic growth in the Old Continent, but voiced doubts about the rate of inflation, which remains slightly above 1.0% and is lagging behind targets. The head of the central bank also spoke about the internal review of monetary targets for the first time since 2003. Ms. Lagarde said a specific date by which a decision would have to be made is not yet available and the necessary market analysis is being carried out. A meeting of bank members was held on Thursday, but monetary policy and interest rates remained unchanged. Among the economic data, the preliminary manufacturing PMI index was 47.8 in Europe and 45.2 in Germany, showing improving sentiment among business participants. The ZEW Economy Index was also released, rising to 25.6 in Europe and 26.7 in Germany, which sent the most positive sentiment from the end of 2015. EUR/USD pair closed weekly trading depreciating -0.6% during the week.

The key Asian pair, USD/JPY has depreciated, driven by investors’ demand for safe assets as market participants chose the Japanese yen. Higher-than-normal demand has been triggered by the outbreak of the Corona virus in China, as investors became worried about a possible larger-scale epidemic and its impact on economic growth. The Bank of Japan held a monetary policy meeting, but the interest rate and the stimulus program were unchanged. Economic data included the country’s export volume, which declined 6.3% over the year, reflecting a slowing industrial sector. The preliminary manufacturing PMI index increased from 48.4 to 49.3, but remained in negative territory. December inflation stood at 0.8% per year. USD/JPY has ended the trading week depreciating -0.8%.

The British pound depreciated slightly against the U.S. dollar. There was no major political news. Among economic indicators, there was preliminary manufacturing PMI, which rose to 49.8 points, while wages increased by 3.2% per year, reflecting good market conditions, especially when unemployment is barely 3.8%. GBP/USD has ended the week appreciating +0.5%.

This week will begin with Germany’s Ifo Economic Sentiment Index, followed by new U.S. home sales. U.S. industry order results and consumer confidence index will be released on Tuesday. On Wednesday, the focus will be on the U.S. central bank meeting and interest rate decision. Bank of England will hold a meeting on Thursday, while Japanese industry data and a Chinese managers purchasing index will be released on Friday.

According to Admiral Markets market sentiment data, 79% of investors have long positions in the EUR/USD pair (increased +7 percentage points compared to last week). In the main Asian pair USD/JPY, 52% of investors have long positions (up 32 percentage points). In GBP/USD, 47% of participants expect a rise (down 8 percentage points). Such market data is interpreted as contraindicative, therefore appreciation is likely in GBP/USD pair and depreciation in USD/JPY and EUR/USD pairs. Analysis of positioning data should always be accompanied with fundamental projections and technical analysis.

Korean index (KOSP200) took a major dive today as it tried to make up for a lack of the session yesterday. However, the drop was halted at the lower limit of the Overbalance structure, offering some hope to the bulls.

CHNComp plunges today as it reopens after Lunar New Year. The index dipped towards 10600 pts handle and bulls are trying to take over. Return back above 200-session moving average (purple line, 10700 pts) would support buyers from a technical perspective.

WTI (OIL.WTI) launched the week near Friday’s lows. However, crude is trying to recover and attempts to break above the prica zone ranging around $52 handle. The zone will be the key hurdle to watch in case upbeat moods prevail in the European trading hours.

Korean index (KOSP200) pulls back from the resistance zone at 300 pts. The index painted a lower high and may eye an attack on the support zone at 289 pts.

WTI (OIL.WTI) plunged below the long-term support zone at $52. However, decline was halted at $50 handle and the commodity is looking for a direction now. It cannot be ruled out that crude will trade sideways between $50 and $52

Reserve Bank of New Zealand left rates unchanged at today’s meeting but signalled that no rate cut is coming this year. NZD caught a bid following the decision and continues to strengthen against other major currencies during European trading hours. NZDUSD is trading 1% higher and is closing in on the 200-session moving average (0.6490). Today’s jump on the pair is also being supported by improving the situation on the bond market.

NZ-US yield spreads have changed in favor of the NZD recently. Source: Bloomberg 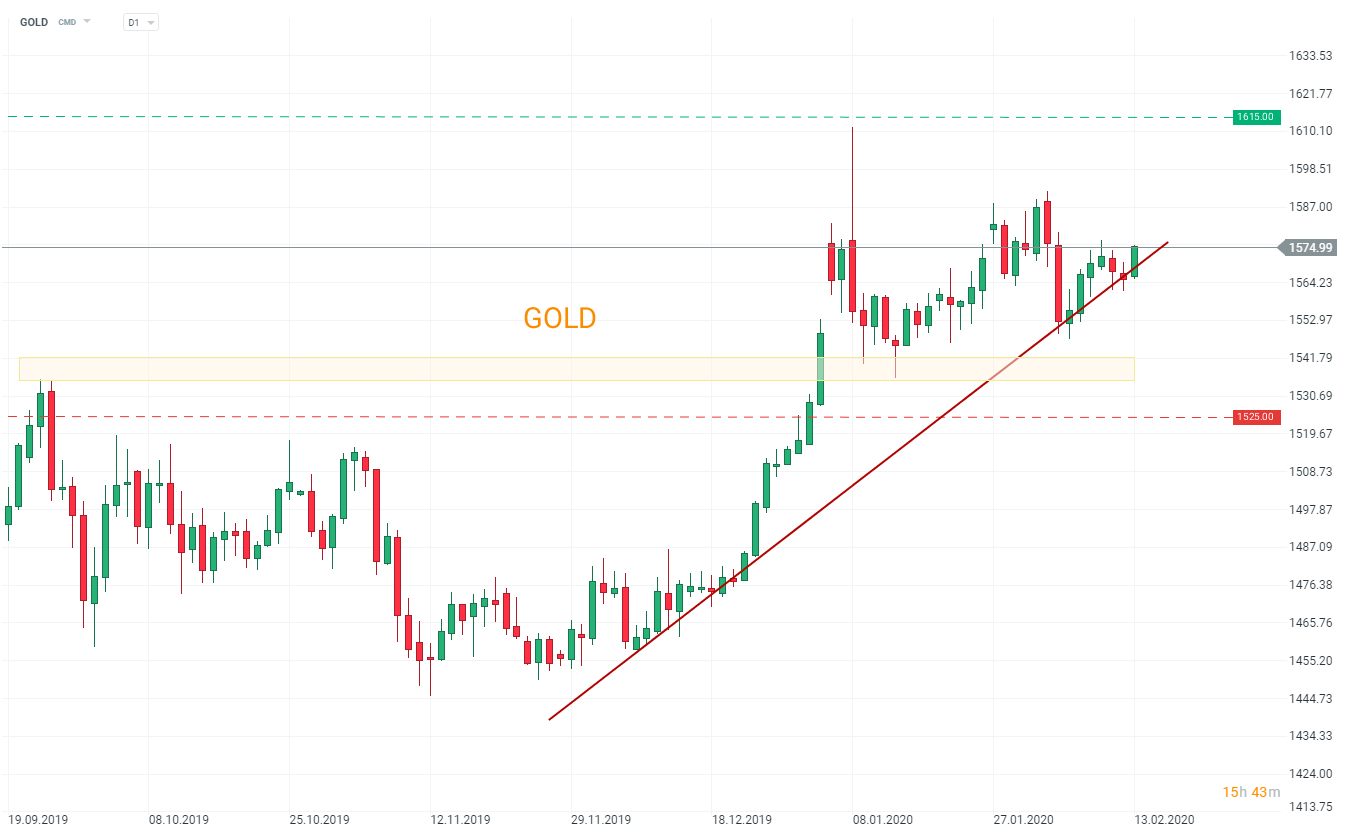 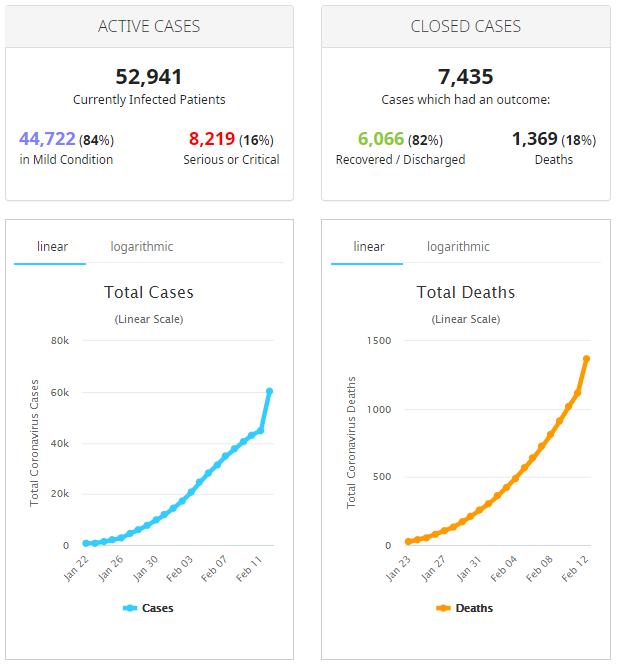 In spite of gold trading flat, silver is moving higher today. Precious metal bounced off the support zone at $17.40 and is moving past 50-session moving average today. The nearest resistance can be found 2.5% higher at $18.10.